Prepared for emergencies: wildfires, earthquakes, and other catastrophes—our Network Disaster Recovery Team can be there in hours to recover AT&T voice and data service. 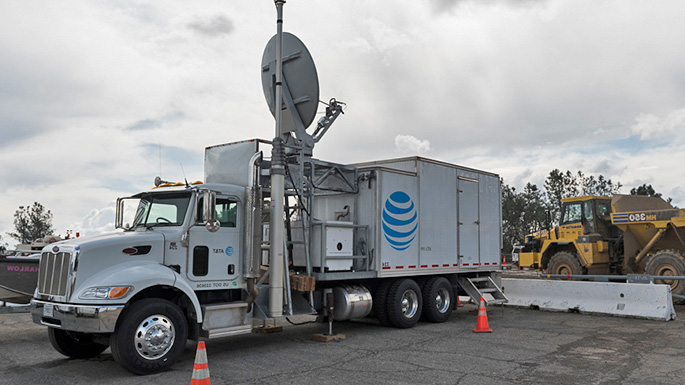 The Network Disaster Recovery team stands at the ready

If a natural or man-made event knocks out AT&T communications infrastructure in a city or region, the Network Disaster Recovery (NDR) team moves fast to restore service. Formed in 1991, the mission of the NDR is to recover AT&T voice and data service network elements to an area affected by a catastrophic event.

The NDR team can be mobilized within hours of an event. It is composed of both full-time and volunteer members from AT&T.

The team can roll out with a fleet of trailers and vehicles (more than 320) installed with infrastructure and support equipment—all the physical components that will carry the restored network traffic. They also use recovery engineering software applications and platforms which allow those components to replicate the settings and services of the failed network infrastructure.

When the trucks arrive at their staging grounds—the team creates, connects, and manages the entire recovery complex and process.

NDR manages disaster events through an incident command system (ICS). They divide the responsibilities of the job into different roles or sectors. Depending on the severity of a situation, it may take a handful of people, dozens, or more. When the NDR sets up for a large hurricane response, for example, it takes approximately 70 people working around the clock to establish the rapid recovery of service at AT&T network sites. 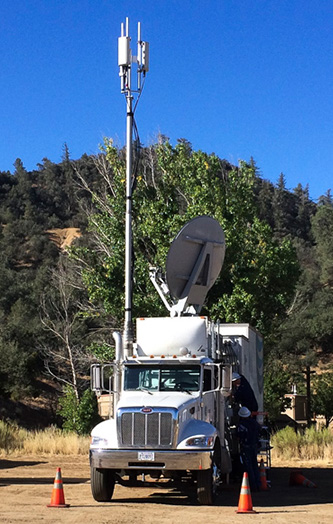 AT&T has invested more than $600 million in its U.S. NDR program and another $15 million internationally. Team members have spent more than 145,000 working hours on field exercises and deployments over the last two decades. AT&T is the first company, nationwide, to receive a United States Department of Homeland Security's (DHS) Private Sector Preparedness Program (PS-Prep) certification.

NDR’s Hurricane Maria response began on September 24 with the transportation of satellite COLTs from NDR’s warehouses to the port at Jacksonville. NDR equipment was delivered to Puerto Rico by cargo ships as well as by cargo jets (one commercial and two USAF C5 flights).

More than 3K recovery team members were deployed to impacted areas for recovery and restoration efforts.

In California, wildfires burned 1.2 million acres of land (an area the size of Delaware), destroying more than 10,800 structures.

The NDR Team deployed equipment to 5 wildfires, which moved quickly and unpredictably. The team was able to keep first responders connected while they battled blazes.

In addition, the NDR Team was able to restore communications for customers in and around devastated areas.

The NDR Team was activated on Thursday evening, August 25, 2011 as Hurricane Irene battered the east coast.

The first team members, four satellite COLTs (Cells on Light Trucks) and support vehicles and trailers were deployed to a staging location on Saturday, August 27. (Satellite COLTs can provide cellular communications in areas without normal wireless coverage or in areas that have lost coverage due to damage to network facilities.)

Between September 1–20, the NDR Team had satellite COLTs deployed in areas of Connecticut, Vermont, and New York that had been damaged by Irene’s winds, tidal surge, and flooding. The satellite COLTs were taken out of service as normal communications capabilities returned to the impacted areas.