AT&T Cybersecurity has been designated a growth and innovation leader in the Frost & Sullivan Global Managed Detection & Response Market report for 2022. Frost & Sullivan, a highly regarded business consulting firm, continually reviews, analyzes, and recognizes industry leaders across multiple industries, technologies, and regions of the world. This competitive report describes findings related to growth and innovation in the Managed Detection and Response segment of the cybersecurity industry.

AT&T Cybersecurity pulls ahead of the pack in Frost & Sullivan report.

AT&T Managed Threat Detection and Response (MTDR) is a sophisticated managed service that finds and responds to threats across an organization’s network. Built on the USM Anywhere platform, the service incorporates 24/7 proactive security monitoring, advanced security analytics, AT&T Alien Labs threat intelligence, native security orchestration and automation capabilities, and deep integrations (via AT&T AlienApps) with other security and IT tools.

AT&T Managed Extended Detection and Response (Managed XDR) extends the capabilities of our MDR service by combining its award-winning threat detection and response capabilities with leading endpoint security to provide one contextualized view across the attack surface.

Security is never one size fits all. Learn how to build a cyberdefense plan to meet your unique needs.

AT&T Business and AlienVault joined forces in 2018 to create AT&T Cybersecurity. This acquisition greatly enhanced the capabilities of its MDR service. Since 2018, we have continued to invest in Alien Labs, the threat intelligence unit of AT&T Cybersecurity, and our AlienApp integrations, which extend the USM platform’s threat detection and response capabilities.

The USM platform’s more than 500 AlienApp integrations expand its threat detection and response capabilities to other best-of-breed products. With AlienApps, data is easily captured and analyzed across the environment for greater visibility into an organization’s security posture. Our customers also benefit from automated and orchestrated response actions that are made possible by Advanced AlienApp integrations with products like SentinelOne, Crowdstrike, Palo Alto Networks, and more. 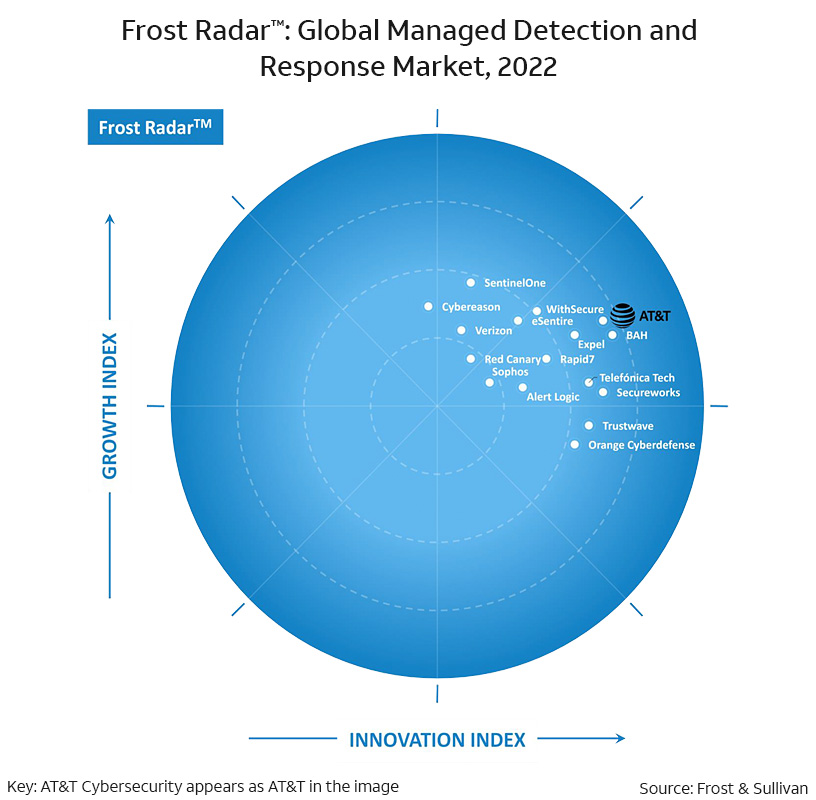 Find out more about the 2022 Global Managed Detection and Response Market.