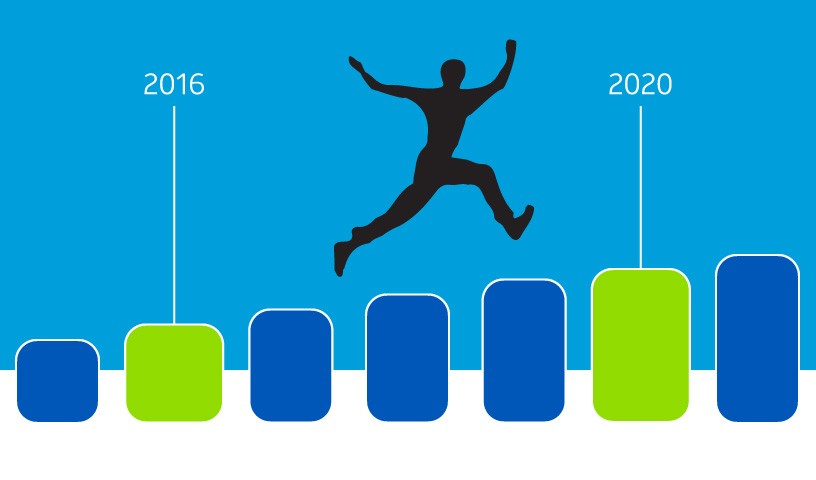 At the end of last year, we published an article examining where technology was heading as we entered the new decade. In 2020, February provides us an additional day on the calendar. It also gives us another opportunity to set a benchmark for technological progress—a chance to reflect on just how much certain technologies have changed since the last leap year of 2016.

We are going to take a more in-depth look into the advancements of specific tech areas in the last 4 years and focus on where we are today and appreciate just how fast things move in our digital age. Let’s look at the leap in technology since the last leap year.

1. Cybersecurity – From reactive to proactive

Anyone Googling ‘top cybersecurity breaches in 2016’ is going to be met with an extensive list of breaches ranging from government agencies like the U.S. Department of Justice to healthcare groups such as 21st Century Oncology and big-name service providers like Cox Communications. The year saw data breaches expose over 4 billion records breaking the previous all-time high record of nearly 1 billion in 2013.

For millions of Americans, cybersecurity became more than just about virus scans and ransomware. It was a realization of just how susceptible our digital environment really could be.

In the four years since, businesses have changed their mindset from reacting and purging an intrusion to preventing the intrusion from happening in the first place. This has manifested itself in several ways across the business world.

Growing popular are automated, AI-based threat detection platforms. These solutions ‘close the seams’ that serve as the entry point for attacks by centralizing security detection, prevention, and response into a single platform. They use an advanced system of sensors and data analysis to give full security visibility without the complexity of multiple disparate security technologies. More importantly, it’s allowing businesses the opportunity to be more proactive about their cyber defense.

To be fair, 5G is still in development and rolling out in phases. But today, if 5G is starting to walk and talk, in 2016, it wasn’t even crawling yet. We had just released our 5G roadmap. It was speculative, and while the tech world was certain it would be “fast,” we hadn’t yet realized just how fast or what kinds of applications it would enable.

Today, 5G is a reality. It’s not quite in everyone’s day-to-day, yet. But almost every provider offers 5G service in some capacity, whether in limited locations or specialized business offerings and solutions. In 2019, AT&T equipped Deloitte University with 5G connectivity to enable innovative experiences for their staff and students. Just before the end of 2019, AT&T rolled out consumer 5G to 10 cities in the U.S.

Buzz and real-life applications about what 5G can/is doing is released daily. We have the power to unlock new experiences such as augmented reality (AR), virtual reality (VR), driverless cars, telemedicine, and connected buildings. We’ll have come a long way by next leap year.

3. Internet of Things - From connecting devices to a connected world

Internet of Things (IoT) is not a new idea. In concept, it is as old as the internet itself. Perhaps it could be argued that 2016 saw it surge with the advent of smart wearables like the Apple Watch and other electronics that supported device interconnectivity. But, the journey to 2019 saw advances in technology that made IoT more than just about connecting devices, but about creating a virtually seamless, connected digital environment.

Emphasis on cloud-based services and virtualization, as well and the advancements in latency of 4G and 5G networks, have brought about the possibility of fully connected ecosystems. Major urban areas are increasingly transitioning into ‘smart city solutions' with connected irrigation, transport, and infrastructure. Self-driving cars are supported by a network of smart technology and vehicles. Internet of Medical Things (IoMT) supports advanced telehealth and remote care solutions. Autonomous service robots powered by edge computing create an always online workforce.

2016 may have seen the world create new possibilities with IoT, but IoT has created the world of 2020 and beyond.

Where to leap to next?

In examining how far we’ve come, we can get an idea of where we’re heading next. Obviously, the technologies and ideas listed above won’t just cease. They’ll continue to develop and expand, creating new ideas and new technologies. Be sure to leap over to our business homepage to keep your finger on the pulse and discover solutions that accelerate your business.